The Eagle Walk at Southern Miss

Deep in the Heart of the South, where the SEC reigns supreme, you’ll find a gem of a football program.  Hattiesburg, Mississippi is the home of Southern Mississippi University.   The Golden Eagles play in Conference USA, and the history and gameday traditions at the school caught me off-guard.  The fan base is large and loyal, and I met many several who were gracious enough to fill me in on some great moments relating to the football program.

I also found out what many think of as the best part of past glory.  A plaque, honoring Jimmy Buffet and Greg “Fingers” Taylor. Buffet, a Southern Miss grad, would play before games.  Fingers was a sophomore at the school at the time and asked if he and his harmonica could join Buffet.  The rest is history, as the two have played together ever since.

Southern Miss first fielded a football team in 1912, when Head Coach Ronald Slay guided the team to  2-1 record.  The Eagles played as an independent until 1931, when they joined the Southern Intercollegiate Athletic Association.  Members of the conference included Alabama, Auburn, Georgia and LSU.  In 1949, Thad Vann was hired as head coach.  He took the program to an elite level during his 20 year reign.   He compiled a 139-59-2 record, and had only one losing season.   Vann’s 1952 team went 10-2 and competed in their very first bowl game, falling to Pacific 27-6 in the Sun Bowl.  Vann’s 1958 and 1962 teams claim a National Championship.

The Golden Eagles are kind of big around here. 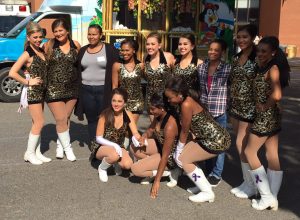 Two hours before game time, the Golden Eagles team and the band walk down the street, and under the upper deck of M. M. Roberts Stadium, which is known as The Rock. Thousands of fans are lined-up to cheer and greet the team.   Banners of former All-American players line the Eagle Walk route. Every fall, incoming freshmen are responsible for giving the entire route a fresh coat of paint.   The Pride of Mississippi Marching Band and the Dixie Darlings, a dance team, are both award-winning and have performed all over the country at many big events. 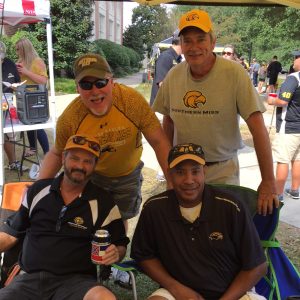 The Rivalry in Dixie is a battle between Louisiana Tech and Southern Miss. The game was first played in 1935, when Tech claimed a 27-0 victory.  The two teams have played 47 times, with the Golden Eagles holding a 32-15 edge.   Another long running rivalry is the Black and Blue Bowl versus the Memphis Tigers.  This battle has been played 63 times, with the Eagles leading the series 40-22-1.  The series hasn’t been played since 2012.

Where it all started 50 years ago – Iggys Corner

The Golden Eagles would be bowl eligible with a win over Charlotte.  The 49ers came to town as a double-digit underdog with a 3- record.  Nick Mullens fired two TD passes in the first quarter to give the Eagles a 14-7 lead.  The 49ers then scored 21 unanswered points in the second quarter to take a commanding 28-14 halftime lead.   A Blake Brewer field goal and a Ed Rolle blocked punt returned for a touchdown extended the lead to 38-14 after three. The 49ers used a pounding running game led by Kalif Phillips, who rushed for 183 yards and a stout defense that forced three turnovers, to take down the Eagles 38-27.    In the end, Charlotte’s rushing game which had 303 total yards was the difference. The Eagles will look to get bowl eligible on Saturday when they travel to Old Dominion.