After spending 62 years in the Atlantic Coast Conference, Maryland jumped to the Big 10 Conference this season, and this is what it is all about — A huge Big Ten battle.  The 4-2 Terrapins were hosting the 5-1 Iowa Hawkeyes on a picture perfect fall day in College Park, Maryland and it was homecoming.   The homecoming events from the night before spilled over to the tailgate areas the next morning, as fans partied until kickoff. I was amazed how many Hawkeyes fans had made the trip for the first-ever meeting between Iowa and Maryland, and how they were tailgating with each other.   To me, this is a part of what makes a college football game such a great event.

In 1892, the school, then known as the Maryland Agricultural College, fielded its first officially sanctioned football team. They played just three games that year and failed to score a point! The following year the team went 6-0, but played primarily against local colleges and even some high schools. In 1911, Harry C. “Curley” Byrd became head coach and held that position for more than two decades until he was named the university president. In 1921, Maryland joined the Southern Conference where it remained for 30 years.  In 1953, the Terrapins were one of seven founding members of the Atlantic Coast Conference. They remained a member of the ACC until joining the Big Ten this season. 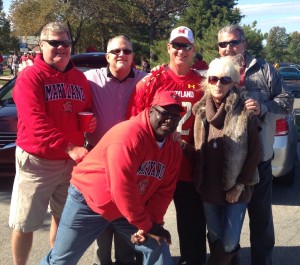 Mom and her boys getting ready for a Terrapins win.

JIM TATUM was hired in 1947, after a one-year stint at Oklahoma, where he had led the Sooners to a conference championship. He became Maryland’s sixth head coach in eight years, (Bear Bryant was one of those six). Tatum guided the Terps for nine seasons, becoming the school’s most successful head coach in modern history, compiling a 73-15-4 record. During his tenure, he led Maryland to two national championships, three conference championships, three perfect seasons, six final Top 20 rankings, and five bowl game appearances. Seven of his players were named First Team All-Americans, including five consensus All-Americans. After the 1955 season, Tatum resigned, returning to North Carolina where he had coached previously.  In 1959, he died of Rocky Mountain spotted fever.

TOM NUGENT was hired in 1959 to take over a program that had gone stagnant. Known for his quick wit, personality and insight, the new Maryland head football coach addressed his team before the first practice of the 1959 season by saying, “Hi, I’m Tom Nugent and I hate West Virginia.” The Mountaineers were Maryland’s first opponent of the season, and Nugent guided the Terrapins to a 27–7 victory in that game. In 1961, Maryland became the first college football program to put players’ names on the back of their jerseys. That season, he led the Terrapins to the best season of his tenure, finishing with a 7–3 record.  Nugent was the first coach to lead the Terrapins to a victory over Penn State, when the 1961 team defeated the Nittany Lions 21-17, breaking a 37-game losing streak to PSU! In 1962, Maryland integrated its football team after Darryl Hill caught the eye of Maryland assistant coach Lee Corso.  Hill became not only the first African-American football player at Maryland, but the first in the Atlantic Coast Conference and at any college or university in the Old South. Nugent left Maryland after the 1965 season.

JERRY CLAIBORNE was hired in 1972 to turn around a football program that had only nine wins in the last five years. In his first season, Maryland improved to 5–5–1, and the following year, they reached their first bowl game in nearly two decades. In 1976 the Terrapins finished the regular season with an 11–0 record, their first perfect mark since Tatum’s 1955 squad. Boomer Esiason, a Maryland quarterback, later described Claiborne’s coaching style as “vanilla” and said his strategy was, “run right, run left, run up the middle, punt, and play good defense.” From 1974 to 1978, Claiborne and the Terrapins secured five consecutive bowl game berths and three consecutive ACC championships. Maryland made it to a sixth bowl game in 1980. Claiborne left Maryland after the 1981 season to take the head coaching job at Kentucky, where he played. 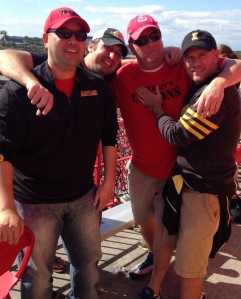 THE RALPH FRIEDGEN era began in 2001. Friedgen, a former Maryland player and assistant coach under Bobby Ross, was hired to replace Ron Vanderlinden. He had success immediately, as Maryland won its first four games and entered the AP Poll for the first time since September 1995. That season, Marlyand’s only defeat during the regular season was to Florida State, which broke a stalemate in the fourth quarter. Maryland closed the year with a win over North Carolina State, securing the ACC Championship and made the Terrapins the first team other than Florida State to take the title outright since the Seminoles joined the conference in 1991. The sixth-ranked Terrapins then faced fifth-ranked Florida in the Orange Bowl—their first-ever BCS appearance, and their first major bowl of any sort since the 1977 Cotton Bowl. The Terrapins lost, 56–23, finishing with a 10–2 record and No. 10 national ranking.  After a few up and down seasons, the 2010 season was the last for Friedgen.  The Terrapins finished 9-4, and Friedgen was named the ACC Coach of the Year, but he was bought out of his contract by the university, which cited a lack of fan support.  Friedgen finished his run at Maryland with a 75-50 record and was 5-2 in bowl games!  The fans I talked to consider Friedgen the best coach the program ever had, and a group of fans formed a group called “Friedgens Legions.” He was replaced by current head coach Randy Edsall.

Three Chi-os and a Kappa

The first years of the program were played in sub-par conditions with no real facilities.  In 1915, university president and former football coach Dr. Harry C. Byrd allocated funds for the construction of a 5,000 seat stadium.  It was completed in 1923 and the Board of Regents voted to name it Byrd Stadium in honor of its main advocate. In 1950, that small field was replaced by the new stadium that had an initial capacity of 34,680, which has since been upgraded to 54,000 seats.

TESTUDO  In the early years the team was known as the Farmers, Aggies, and Orioles.  In 1932, Curley Byrd suggested that the namesake become the diamondback terrapin (Malaclemys Terrapin), a species of land-dwelling turtle common throughout the state.  The mascot became a diamondback terrapin named Testudo, which means “turtle” in Latin. In 1933, the graduating class raised funds for a 300-pound bronze replica of a terrapin. In the 2000s, Ralph Friedgen began a pregame tradition of the football players walking 200 yards, through what is known as “Terp Alley” to the locker rooms, and touching the bronze Testudo. Many fans also feel the touching the Testudo brings good luck.

Brothers display the colors of the Maryland state flag.

COLORS Originally, the Maryland athletic teams had no official colors, often using gray or maroon and gray for their uniforms. In modern times, the uniforms have been based on some combination of the four colors of the Maryland flag: red, white, black, and gold. In 1961, Maryland wore gold jerseys with black numerals for the first time since 1945 for their season opener against Southern Methodist. In 1987, Joe Krivak introduced black jerseys with the Maryland flag on the sleeves for selected games. Maryland unofficially introduced the “Byrd Blackout” and was one of the first schools to utilize the “blackout” concept, where fans uniformly wear one color. For the 2011 season, Maryland wore new Under Armour uniforms that offered a “dizzying array” of combinations in the four school colors. In the season opener against Miami, the Terrapins unveiled a unique uniform based on the Maryland state flag that received national media attention. Maryland has an amazing combination of colors and uniform varieties, perhaps more than any other team in the country.

These three amigos are Maryland alums 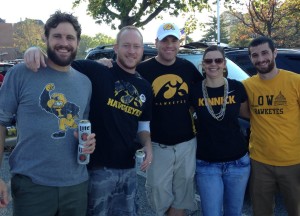 Maryland has four traditional rivals, Virginia, Penn State, West Virginia, and Navy. The Maryland-Virginia rivalry was due to proximity and history, and the programs also vie for the same recruits. The future of this series is in question since Maryland has moved to the Big Ten. The Terrapins lead the series 44-32-2.
West Virginia has often been called Maryland’s biggest rival. The teams have met 51 times since their first game in 1919. The Maryland-West Virginia rivalry had a chance of becoming an annual game with West Virginia potentially joining the ACC in 2012, but the Mountaineers wound up joining the Big 12 Conference. The long-running series was put on hiatus for the 2008 and 2009 seasons, but resumed in 2010.  This year, West Virginia defeated Maryland 40-37.

In a rivalry known as the Crab Bowl Classic, Maryland played the Naval Academy, also located in the state of Maryland, several times between the 1930’s and 1960’s. In 1964, an incident in which a Terrapins player flashed an obscene gesture prompted Navy officials to suspend the series for 40 years. They finally played again in 2005. As of 2010, the winner of the Crab Bowl Classic is awarded the Crab Bowl Trophy.
The Maryland-Penn State rivalry is one of the most lopsided series in college football  The teams met in briefly interrupted stretches from 1917 until 1993, with Penn State leading the series 35-1-1.  Maryland’s sole win came in 1961. The rivalry now takes on a more significant role as both teams play in the Big Ten East Division.

The first play of the game saw Drew Ott intercept a C.J. Brown pass, giving the Hawkeyes field position at the Maryland 32-yard line. Five plays later Mark Weisman gave the Hawkeyes a 7-0 lead on a four-yard touchdown run. Iowa took a 14-0 lead on their next possession when quarterback Jake Rudock found Henry Coble for a two-yard scoring toss. The Terrapins settled down and scored 17 unanswered points to take a 17-14 halftime lead. The homecoming crowd had plenty to cheer about in the second half as Stefon Diggs hauled in a 53-yard touchdown pass from backup quarterback Perry Hills. The Hawkeyes answered quickly as Weisman found pay dirt again on a two-yard scamper to cut the deficit to 24-21.  Maryland put the game away early in the fourth quarter as William Likely picked off Rudock and rumbled into the end zone for a 45-yard interception return. Wes Brown later added an insurance score giving the Terps a 38-21 advantage. The Hawkeyes rallied late, but but fell short 38-31. After the game, both teams were 5-2 on the season, one win away from becoming bowl eligible.