This wasn’t my first time to catch a game at the U.S. Air Force Academy, but when I found out this was going to be on my schedule I couldn’t help but get excited. For those of you who haven’t made the trip to Colorado Springs, let me advise you, add it to your bucket list!

The U.S. Air Force Academy has so much more to offer the fan than just football. The visitor center is a MUST see, filled with history and tradition. There, you will learn what each cadet and officer has to go through on a daily basis, and see an example of their living conditions.   A short walk takes you to the Cadet Chapel, the most popular man-made attraction in Colorado, with more than a half-million visitors every year. 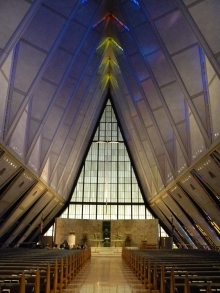 The interior of the Cadet Chapel

A Little History . . .  Falcon Stadium sits at the base of the Rocky Mountains, and is one of the most picturesque settings in the country. The stadium sits at an elevation of 6621 feet (2018 m) above sea level, the second highest stadium in the FBS.  Pregame activities typically include flyovers by U.S. Air Force aircraft, including the F-15 and B-2, though those have been suspended due to sequester cuts.  The highest attendance at a home game was 56,409 spectators in 2002, when the Falcons battled Notre Dame. The Falcons started their football program back in 1955 and played at Denver University in the early years.

The Falcons are not only recognized by the lightning bolt on the side of their helmets, but their traditional option attack. Since Fisher DeBerry took over as Falcons head coach in 1984, Air Force has been one of the premier rushing teams in the nation. In a span of 21 years, the Falcons ranked in the Top-10 in the nation in rushing 19 times. The Air Force football team has enjoyed success not only on the field but also in 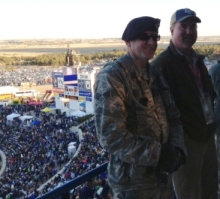 the classroom. The Falcons have had 39 Academic All-Americans.

There have been only seven coaches in the teams  58-year history. Current head coach Troy Calhoun has been at the helm since 2007.  Legendary NFL coach Bill Parcells did a one year stint here in 1978. But Fisher DeBerry is credited with putting Falcon football on the radar.   He walked the sidelines for 22 years, but the most successful season in Falcon Football history came in 1985, under second-year coach DeBerry.  They Falcons recorded 10 straight wins, climbing the polls to No. 2 in the nation.  They would lose to defending National Champion BYU by seven, but rebound with a bowl game win over Texas in the Bluebonnet Bowl, finishing with a 12-1 record and No.5 ranking. 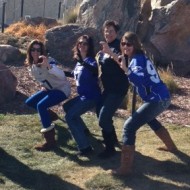 Given the physical restrictions that military service puts on cadets, Air Force football has traditionally been based more on speed, willpower and technical execution than on pure size and strength. The Falcons have traditionally run a triple option offense, and have routinely competed favorably against bigger, stronger opponents. While the wishbone is almost always assumed synonymous with the triple option, Air Force only deployed the formation occasionally under Coaches Fisher DeBerry and Ken Hatfield. One mainstay from both coaches is the option, and the consistent repetition to near perfection, as witnessed by the wins and the rushing statistics the past 25 years, regularly placing Air Force as one of the Top-10 rushing teams in the nation.

Conference titles. They shared the titles in 1985 and 1995, but they won the title outright in 1998.  In 1999, the Falcons moved up to the Mountain West Conference.  Each year, Air Force takes part in a head-to-head series between Air Force, Army and Navy, for the right to host the Commander in Chief’s Trophy. Air Force has held the trophy in Colorado Springs 13 times.

Nothing’ll stop the U.S. Air Force!  One of my favorite traditions at the pre-game activities a Falcon Stadium is the singing of the “Air Force Song.” This is a classic hymn that many might not realize is part of Air Force tradition.   The lyrics to this classic follows at the end of the story.

The Game.……Notre Dame quarterback Tommy Rees tossed 5 touchdown passes, leading the Irish to a 45-10 win. The Falcons took an early 7-0 lead on a 10-yard run by Colton Huntsman. Rees, then took control finding Corey Robinson in the corner of the end zone for a 35-yard score that tied the game at 7-7. Rees completed 17 of 22 passes for 284 yards, with five TDs to five different receivers. The win moved the Irish to 6-2 on the season, making them bowl eligible.

Next Up. . . . This coming week I will get two games in, as I travel to Denton Texas on Thursday night to see the Rice Owls battle North Texas. Saturday you can find me in Arkansas, as the Razorbacks host Auburn.

Off we go into the wild blue yonder,
Climbing high into the sun;
Here they come zooming to meet our thunder,
At ’em boys, Give ‘er the gun! (Give ‘er the gun now!)
Down we dive, spouting our flame from under,
Off with one helluva roar!
We live in fame or go down in flame. Hey!
Nothing’ll stop the U.S. Air Force!

Minds of men fashioned a crate of thunder,
Sent it high into the blue;
Hands of men blasted the world asunder;
How they lived God only knew! (God only knew then!)
Souls of men dreaming of skies to conquer
Gave us wings, ever to soar!
With scouts before And bombers galore. Hey!
Nothing’ll stop the U.S. Air Force!

Bridge: “A Toast to the Host”

Here’s a toast to the host
Of those who love the vastness of the sky,
To a friend we send a message of his brother men who fly.
We drink to those who gave their all of old,
Then down we roar to score the rainbow’s pot of gold.
A toast to the host of men we boast, the U.S. Air Force!

Off we go into the wild sky yonder,
Keep the wings level and true;
If you’d live to be a grey-haired wonder
Keep the nose out of the blue! (Out of the blue, boy!)
Flying men, guarding the nation’s border,
We’ll be there, followed by more!
In echelon we carry on. Hey!
Nothing’ll stop the U.S. Air Force!

Originally, the song was titled as “Army Air Corps”. Robert MacArthur Crawford wrote the lyrics and music during 1938.[1] In 1947, when the Air Force became a separate service, the song became the “Air Force Song”. 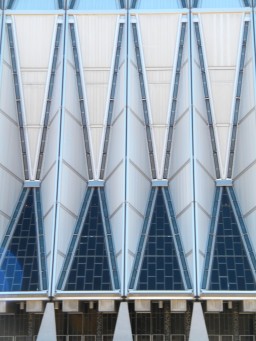 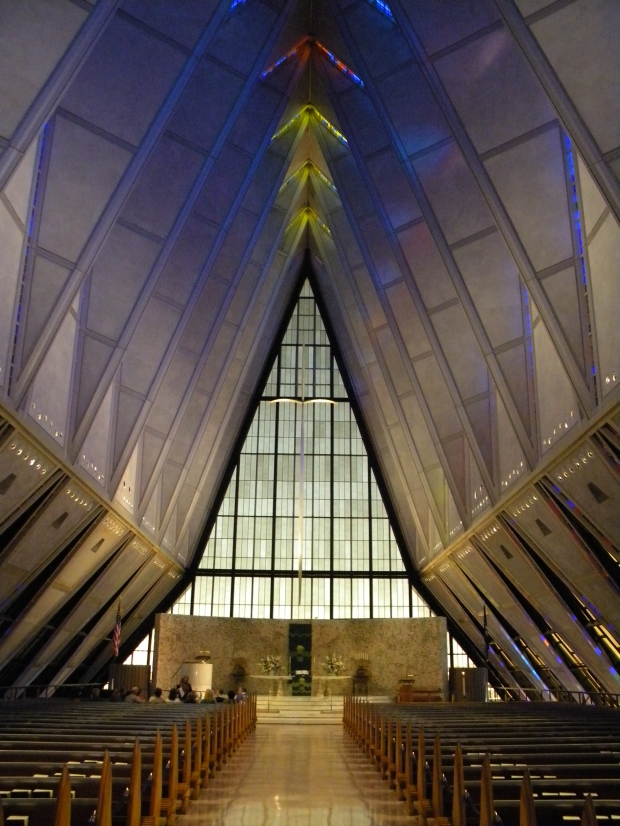