There’s more coverage of college football through more media outlets today than ever before.   Everything is discussed, scrutinized, and analyzed.  Many times those talking points extend beyond simply commenting on how a team or player might be performing.  But in the last few years, a new topic has become a big part of the conversation, and that is the fashion of football.

With everyone looking to gain any advantage possible, schools everywhere are partaking in using newer, more futuristic looking uniforms in order to attract new players and fans.  It’s no longer important to just dress for the game — it also important to look good too.  Some of these uniforms have been revelations, while others have been far less extraordinary.  With Virginia Tech rocking their new Hokie Stone helmets against Georgia Tech last week, I decided to take a look back at some of the more memorable uniform combinations exhibited by ACC teams.

A proud program who is easily identifiable by their famous garnet and gold colors, these jerseys perfectly incorporate the Seminoles traditional colors with an all-black kit that is both sharp and intimidating.  The lettering down the side as a tribute to the Seminole nation is a classy touch.  This jersey was only ever worn once by Florida State back in 2006 but count me in as someone who would like to see it brought back in the near future.

This black and orange combo that Virginia Tech sported in their 2010 season opener against Boise State also has that menacing feel to it combined with a matrix-esque design within the numbering that is futuristic without being too over the top.  The black matted helmets go perfect with the uniform and really make the orange decal on the helmet standout.

The Yellow Jackets “Honeycomb” design is one of several alternate jerseys worn during the Paul Johnson era.

When I first heard that Georgia Tech were going to be wearing “honeycomb” jerseys made by Russell I just assumed that a wardrobe disaster would be inevitable.  Instead, what I saw was a color combination that was consistent with the school’s traditional colors (I know, color me old fashion that I would want a school’s alternate jersey to have a least a slight resemblance to what you might find them wearing on any given Saturday), and design that was intricate and subtle, creating a quality uniform.

Now there’s no wrong way to pay tribute to the United States of America and the men and women who fight for this country.  Patriotism is an honorable attribute and should be commended. 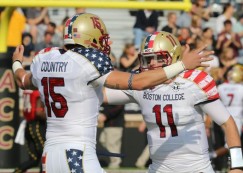 However, there is a wrong way to dress for a football game, and that’s exactly the category these tribute Boston College uniforms fall into.  The jersey was designed as a part of Under Armor’s Freedom Campaign to benefit the Wounded Warrior Project, with the jerseys all auctioned off after the game.  While I am not a fan of the designs, Boston College does get credit for participating in raising money for such an awesome cause.  Next time though, they may want to do it in a more aesthetically pleasing manner.

This Under Armor design created quite a buzz on social media on opening weekend of the 2011 season.

The Terps had a complete jersey makeover when head coach Randy Edsall took over the program at the start of the 2011 season.  These jerseys were sported by the Terrapins in Edsall’s first game and the reviews were mixed.  It’s not surprise that Under Armor’s design incorporated the Maryland flag, something the state is very prideful in.  What is surprising is the extremely high level of clashing colors and patterns going on.  I love the white and red combination, but it’s impossible to ignore the yellow and black helmet and shoulder pad that look out of place.  Color me not a fan, but it was bold and may be the most discussed uniform design ever.

Miami in all orange.

The “U” resonates with anyone and everyone who might be a college football fan, and Miami has some of the sharpest and most identifiable uniforms in the nation.  That’s why I was so disappointed when I saw Miami wearing these uniforms at a home game against Virginia Tech.  Orange has been a great complimentary color for the Hurricanes and the orange tops with the white bottoms is a classic.  However the neon orange approach, coupled with the dark green helmet makes this proud program look much more Florida A&M than the University of Miami.