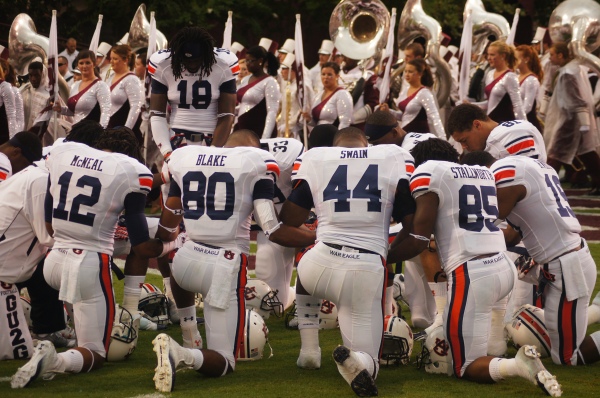 It doesn’t matter if Auburn wins its next 10 regular season games, the Tigers 0-2 record ranks 2012 in the Top-10 worst starts in Auburn football history.

Since football came to the Plains in 1902, Auburn has gone 0-2, or worse, only eight times.

But forget about the dismal start; Auburn has a chance to put a strike in the win column Saturday in its home opener against the Louisiana-Monroe Warhawks.

Yes, those same Warhawks that upset the then ranked No. 8 Arkansas Razorbacks last week in Little Rock, Ark.

Arkansas went into the game as 30.5-point favorites and came out 1-1. The squad dropped out of the Top-25 completely, leaving Razorback fans, and the nation, wondering, “what just happened?”

That’s right. The Warhawks haven’t had a winning season since they arrived in Division I. But the losses suddenly seem okay when game’s like last Saturday’s happen.

ULM knows its place. It will never be a title contender, but it doesn’t have to be. By beating top-ranked teams, especially the powerhouses of the SEC, the Warhawks make a statement to the nation: Don’t count us out.

Its win over Arkansas isn’t the first upset ULM has pulled off in recent years.

Think back to Nov. 17, 2007. With one week to go before facing its hated rivals in the Iron Bowl, Alabama had an easy win at home against ULM, or so they thought.

Then the unthinkable happened. The Warhawks marched into Bryant-Denny Stadium and shocked the Tide nation.

Alabama was a measly 6-4 at the time, but the loss was no more expected than when you order a well-done steak and it comes out rare.

Now it is Auburn’s turn to host the Warhawks.

Coming into the year, this match-up was described as an easy win, a given if you will. Now it’s a must win.

The last time Auburn started 0-3 was under coach Earl Brown in 1950. Those Tigers finished the season 0-10.

In Auburn football’s 110-year history, only three teams have gone 0-3.

The 2012 Tigers are desperately trying to keep it that way.

Last week’s game in Starkville put all of Auburn’s blemishes on display. There was the lack of protection from the offensive line; the missed tackles from the defense; the missed routes from the receivers and the sub-par play from the quarterback.

Nothing seemed to go right. In the 28-10 defeat, Auburn’s offense put up just 216 yards, while its defense allowed Mississippi State to run for 166 yards and throw for 222 yards.

In two games, Auburn has just one offensive touchdown. The red zone has become a Bermuda Triangle of sorts, leaving no signs of offensive production in its 20-yard span.

The coaches and players know this. They know the pressure that has been put upon them. They know what has to be done. Now they just have to execute.

Come Saturday morning, the Tigers have two options: lose and become the first team in 62 years to start 0-3, or win and begin an uphill battle with all eyes on the SEC Championship.